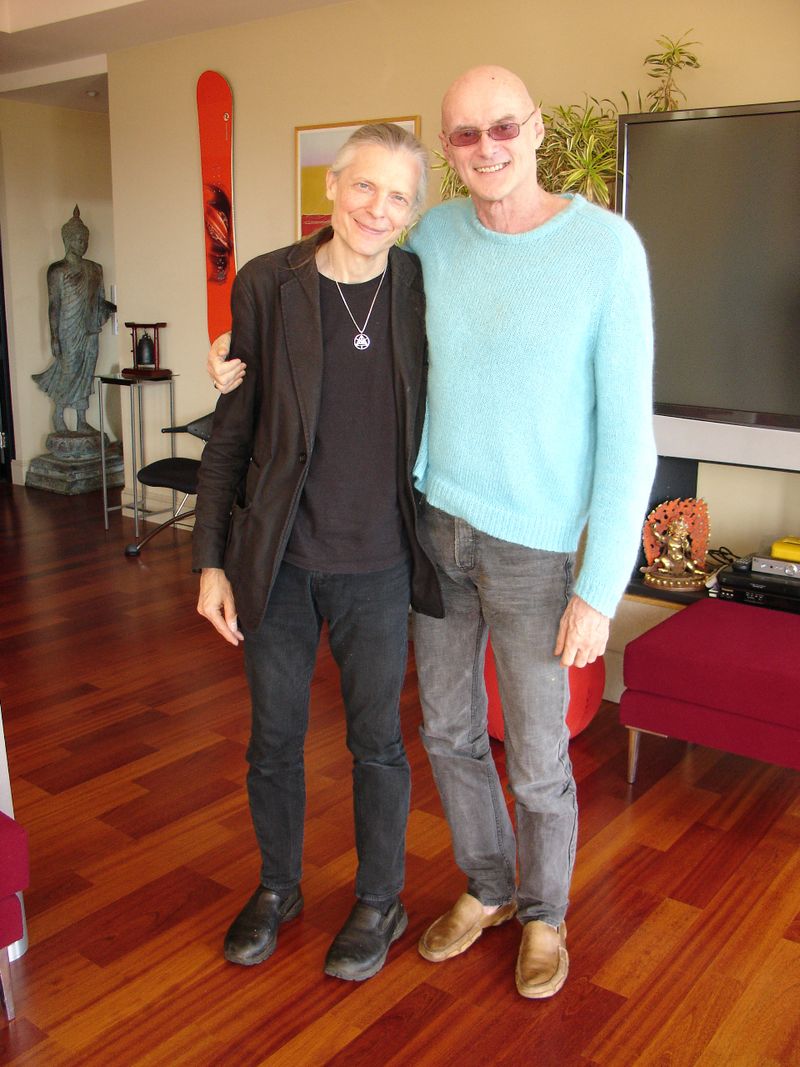 October 18 we had the pleasure of meeting with Ken Wilber at the Integral Institute in Denver, Colorado.  Alex and Ken discussed a subject they have addressed again and again through the years – Integral Art and the altitude of the artist manifesting the artifact.  What level of higher realization is resonant within the being of the creator?  An integral artist, Wilber stated, holds themselves accountable, so that their spirituality and their creativity seamlessly blend.  Ken suggested for artists the Quaker edict:  "May the next expression out of our mouths (or brushes) be the direct inspiration of God."   A Quaker meeting has the air of expectant openness, with all members listening together for the Spirit to move them.  What if the art studio was charged with that kind of vigilant vulnerability and receptivity?   Ken doesn't suggest that artists stand around waiting for lightning to strike, but the intention of an integral artist must be the highest and deepest expressions of which they are capable at the time. The alignment or attunement of that artist allows for the most powerful delivery and the most effective conduit of the divine force.

The complete Being of an artist is resonant and embedded within each of their works. The attitude or character of the artist is imprinted on the artifact.  We get a completely different taste from "Campbell's Soup Can" by Warhol than from "Starry Night" by Van Gogh.  Both artists are folk heroes, ascended masters whose stories are well known.  One, the master of pop, adored by millions during his lifetime and beyond.  The other, shunned and held in contempt by society in his lifetime, recognized only after his death as an authentic transmitter of a powerful creative force. We resonate differently with these two artists.  Where Warhol's message is a love affair with materialism and corporate media culture, Van Gogh's paintings evoke oneness with nature. As creators, we are responsible for the vibration we send into the world. If we, as visionary artists, intend to bring our viewers into resonance on a higher level we need ourselves to awaken to the visionary realm.  Then, we can provide a third-eye witness portrayal, evidence of the existence of a domain experienced by countless mystics.

We spoke of our land in the Hudson Valley and the importance of having art retreats surrounded by nature.  Research findings indicate that the most frequent trigger for mystical experiences is nature, with nature art being the second most frequent trigger. Another national survey found that almost half of all the people who have had mystical experiences consider the beauties of nature to be their primary inspiration.*  In one of Buddha's most famous teachings, the Flower Garland Sutra, Buddha was surrounded by disciples when he held up a flower.  All students tried to explain the meaning of this gesture except one who was suddenly enlightened.  The Buddha is often portrayed touching the earth, his witness to overcoming samsara and attaining enlightenment.

We are always grateful for spending time with Ken, in our opinion, the greatest philosopher alive.