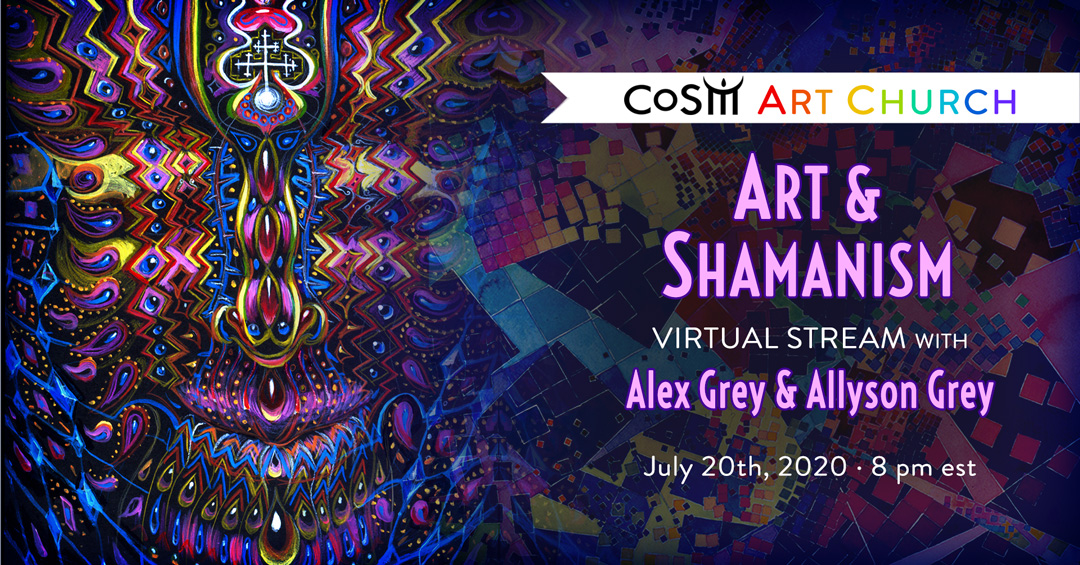 Shamanic cultures around the world portray in art and artifacts the interaction of the human and spirit worlds, a communion that blurs the lines between art and medicine. The shaman journeys to visionary realms, a lower, middle, and upper world, via drumming or taking sacramental substances, and while in altered states of consciousness, makes contact with healing or hostile spirit forces. Tribes as diverse as the Inuit of Northern Canada, the Huichol of Mexico, African Congo culture, Australian Aborigines and islanders of the south Pacific, all produce objects depicting the interaction of the human and spirit worlds. The shaman is the most psychically sensitive person within the community, and performs rituals intended to bind the community together. Art can become a record of the tribal narrative or a way to honor a mythic cosmology and spiritual forces. 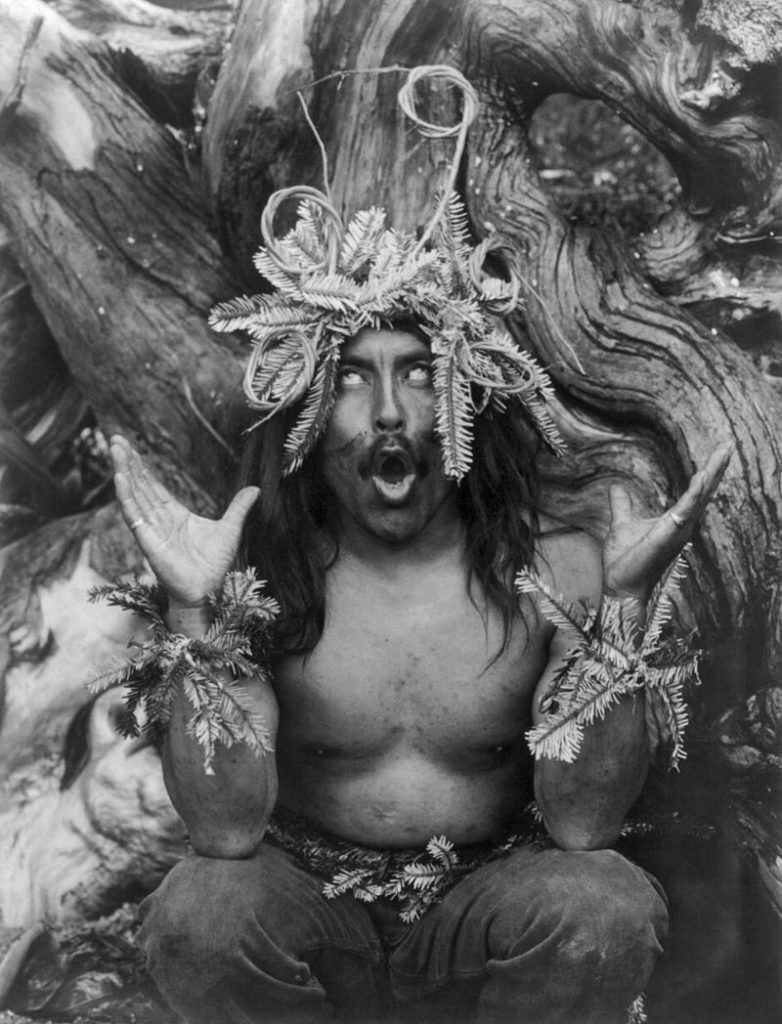 Frequently in these communities, the artist and the shaman are one and the same person. Masks, headgear, and specialized ritual dress enhance the shaman’s power in trance or to communicate visions. Feathered headdresses or crowns, special garments, face painting and body painting, tattoos and scarification signify the psychic pattern languages of the shaman. Colorful and outstanding adornment, prepare and protect the body during possession states.

Ancient shamanic artists from around the world portray recurring archetypes, such as the radiances and auras of the “light body” and an “x-ray style” of seeing into the body, examples of human-animal hybrids, spirits and spirit worlds. Through long and arduous apprenticeships, shaman develop their imaginal powers on journeys that bring them to the brink of insanity and back. Vivid visioning of dismemberment by animal and spirit forces can breakdown the identity of the novice or initiate shaman. The shattered personality is then reassembled into the wounded and transformed healer. 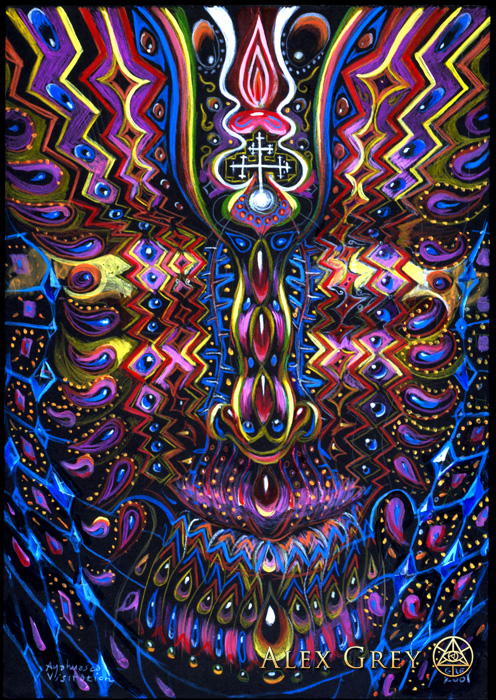 Ayahuasca Visitation by Alex Grey, 2001 Colored Pencil and Acrylic on Black Paper. “This Being appeared to me during an Ayahuasca journey the evening of January 6, 2001. I worked on this drawing until January 9 attempting to conjure a bit of the Being’s tattooed kaleidoscopic iridescence. It stared ‘face to face’ at me for some time and I admired it’s beauty.” —Alex Grey

Wisdom, drumming and healing songs are transmitted to the wounded healer during the shamanic journey. The shaman’s journey is a restorative mission for the sake of the physical, mental and spiritual welfare of their community. The art of the shaman is not made for mere visual entertainment but for sacred and often ritual purposes. The totem, talisman and fetish are imbued with magic medicinal power and are made to serve the tribal people or to work with beings encountered in the visionary worlds.

Shaman cave painters made the first Psychedelic Art. Visionary artists seen at today’s worldwide transformative festivals can trace their lineage back to those ancient initiation places. According to the essay, “Why Shamanic Practices Are Making a Comeback in Contemporary Art,” artists today are addressing witchcraft, the occult and feminism and are representing the self in performance, photography, film, and conceptual portraiture as priestess and cult queen. 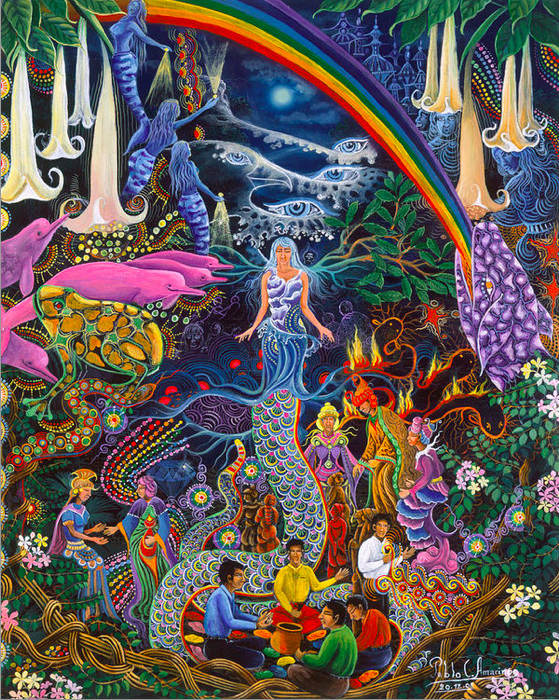 Alto Cielo by Pablo Amaringo, Recognized as one of the world’s great visionary artists, Pablo Amaringo was renowned for his intricate, colorful paintings inspired by his shamanic visions. A master communicator of the ayahuasca experience–where snakes, jaguars, subterranean beings, celestial palaces, aliens, and spacecraft all converge—Amaringo’s art presents a doorway to the transcendent worlds of ayahuasca intended for contemplation, meditation, and inspiration.

The recent widespread ceremonial use of Ayahuasca in the West, has introduced the power of deep jungle medicine people and plants to a post-modern society. The Ayahuasca Artists like Pablo Amaringo and Luis Tamani express the powerful visual impact these experiences have on the mind. Speaking of his Ayahuasca experiences, musician, Sting describes feeling as if he were “wired to the entire cosmos,” with “direct access to the God Head.” Artists in every medium have braved the territory of expanded consciousness through ritualistic, native practices, alternative modes of spirituality, altered states of consciousness, for personal evolution and creative insight. The model of the Shaman as empowered inward journeyer and wounded healer has unique importance in today’s fragmented postmodern world. 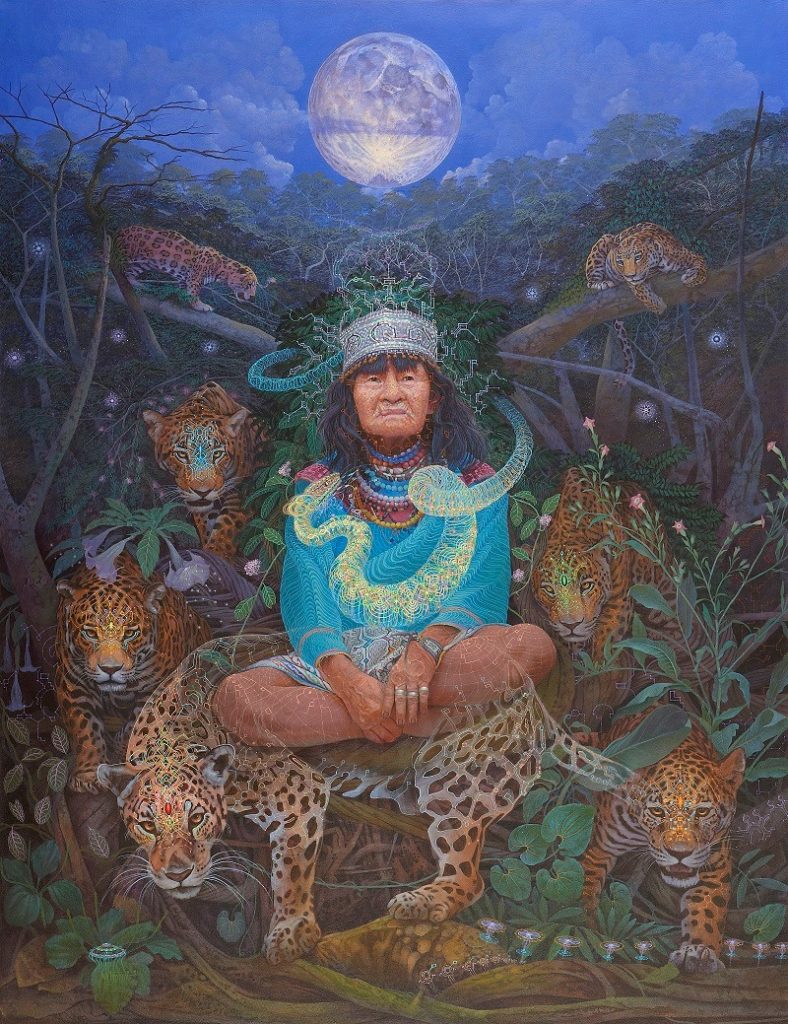