Perhaps the first thing to say about Tibetan Buddhist Art is that it is anonymous, with the artist seemingly functioning as a skillful instrument who is capable of accurately depicting any of the figures from its vast pantheon of deities. Then, given that these deities have precise iconographic forms, colors, postures and attributes, the very act of visually rendering them can appear more like a process of painting by numbers than a process of creative imagination or artistic freedom. The same may be said of Indian classical music, where to the untrained ear one raga seems pretty much the same as any other, while for the performers themselves each raga is like a unique universe of emotive expression and creative improvisation. This analogy is actually quite accurate, for the ‘nine dramatic sentiments’ (navanatyarasa) of Indian dance, music and drama, are also characteristics of the powerful semi-wrathful tantric deities of Vajrayana Buddhism. These sentiments are: sensual or erotic, regal or heroic, repulsive or stern, jocular or playful, wrathful or threatening, terrifying or frightening, compassionate or loving, dignified or majestic, and peaceful or serene. 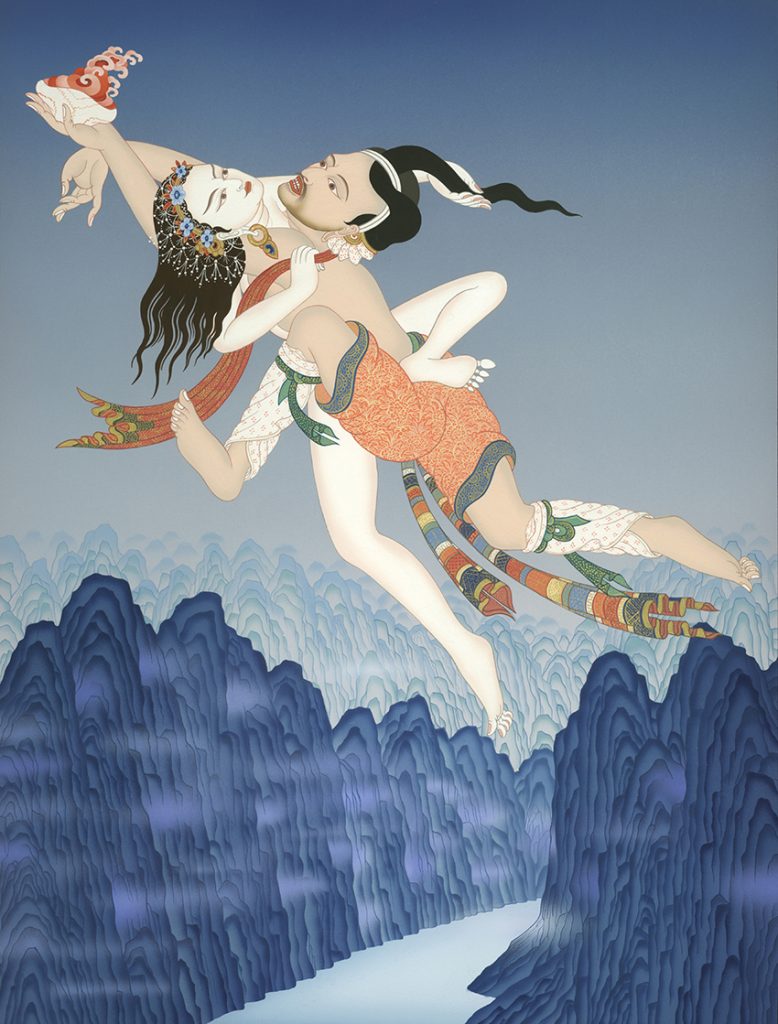 Within the structural framework of these apparent constraints, one’s individuality as a creative human being with a need for personal expression can tend to dissolve into the subject matter one is depicting.  For, in the framework of a tradition growth is vertical as well as horizontal, and there comes a point in the process of learning where one feels one has tapped into the actual source of the tradition. And what is unique about the Indo-Tibetan Vajrayana traditions is that they are ‘living traditions,’ which have been transmitted by a lineage of teachers since their origin or ‘revelation,’ many of which are believed to derive from the spoken words of the Buddha himself. Essentially, this means that the entire spectrum of the Buddhist teaching traditions are encapsulated in the symbolic and visual forms of its vast pantheon of peaceful and wrathful deities. Or, as The Dalai Lama says, “In short, the quickest way to become a Buddha is to imagine yourself as one.” 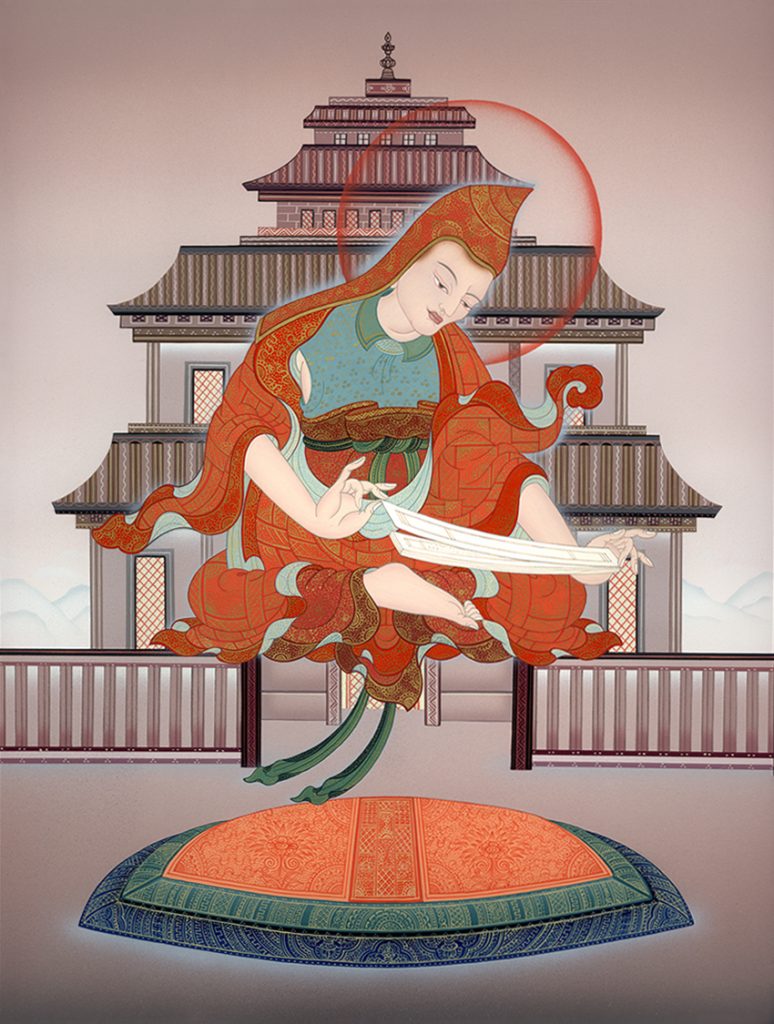 Shantideva, the ‘lazy monk’, was always ridiculed by his fellow monks at the famous Indian Buddhist monastery of Nalanda for doing little more than eating and sleeping, until the abbot decreed that he must either demonstrate his knowledge in a discourse, or else leave the monastery. All of the monks assembled at dawn on the appointed day to watch Shantideva make a fool of himself, but unbeknown to them the abbot had instructed him to recite the mantra of the wisdom-deity Manjushri all night. This he did, until just before dawn Manjushri manifested in his cell and bestowed the power of divine speech upon him. Thus, it was that in front of the entire monastic assembly Shantideva began his discourse by levitating above the throne and delivering the sublime discourse on developing bodhicitta, or the ‘mind of enlightenment,” that is now famously known as “A Guide to the Bodhisattva’s Way of Life.” 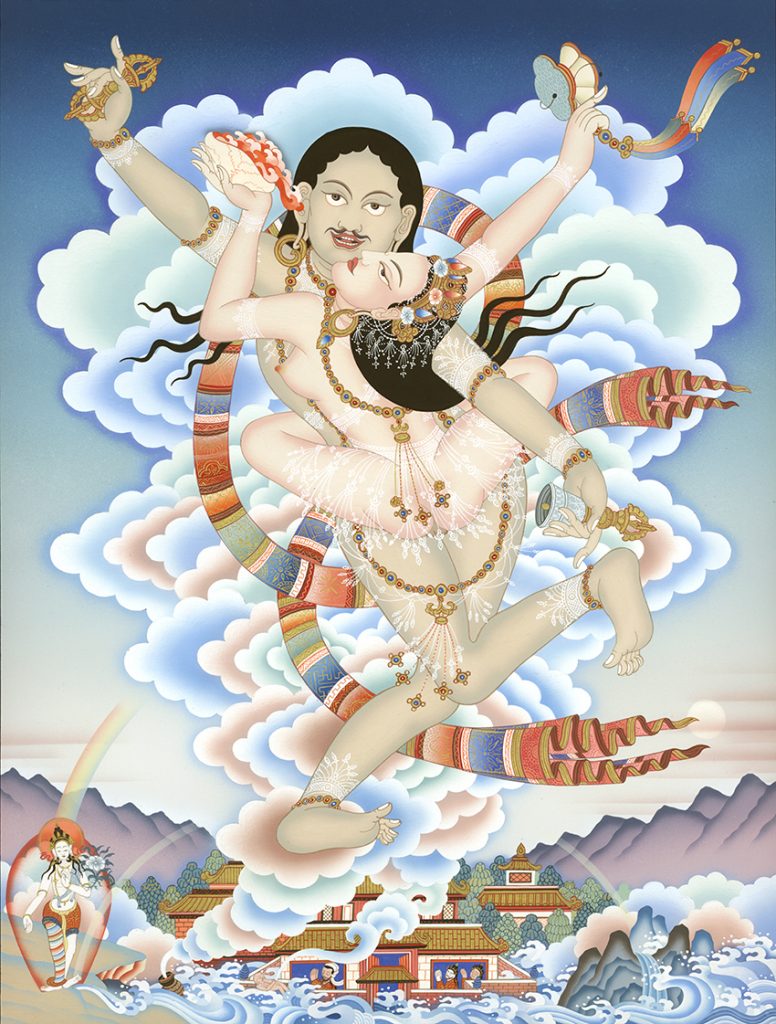 Ghantapa, the ‘bell-holder,’ was a highly realized yogin living in eastern India who once refused to honour King Devapala. The king decided to humiliate him by sending a courtesan’s daughter to seduce him. This young girl first came to Ghantapa’s hut as a servant, but over the course of time she gave birth to his child. After hearing this news Devapala came with his entourage to publicly ridicule this fallen yogin, and found him holding his child in one arm and a pot of alcohol in the other. Enraged by the king’s accusations Ghantapa threw the child and pot to the ground, whereupon they instantly transformed into a vajra and bell, while a great flood arose from their impact. Grasping the vajra and bell, Ghantapa embraced his consort and flew into the sky with her as they transformed themselves into manifestations of Chakrasamvara and his consort, Vajravarahi. In great repentance, the king and all his subjects bowed down before Ghantapa, and through the power of their prayers the bodhisattva Avalokiteshvara came to stem the floodwater with his feet.

Robert Beer has studied and practiced Tibetan Buddhist Art for the past forty years, while always maintaining an openness to all other spiritual traditions, especially those dealing with the parapsychology of death, rebirth and the afterlife. He lived in India and Nepal where he studied with several of the finest Tibetan artists living at that time. Since then, he has worked at developing his understanding of these highly esoteric subjects and the contexts in which they arise. 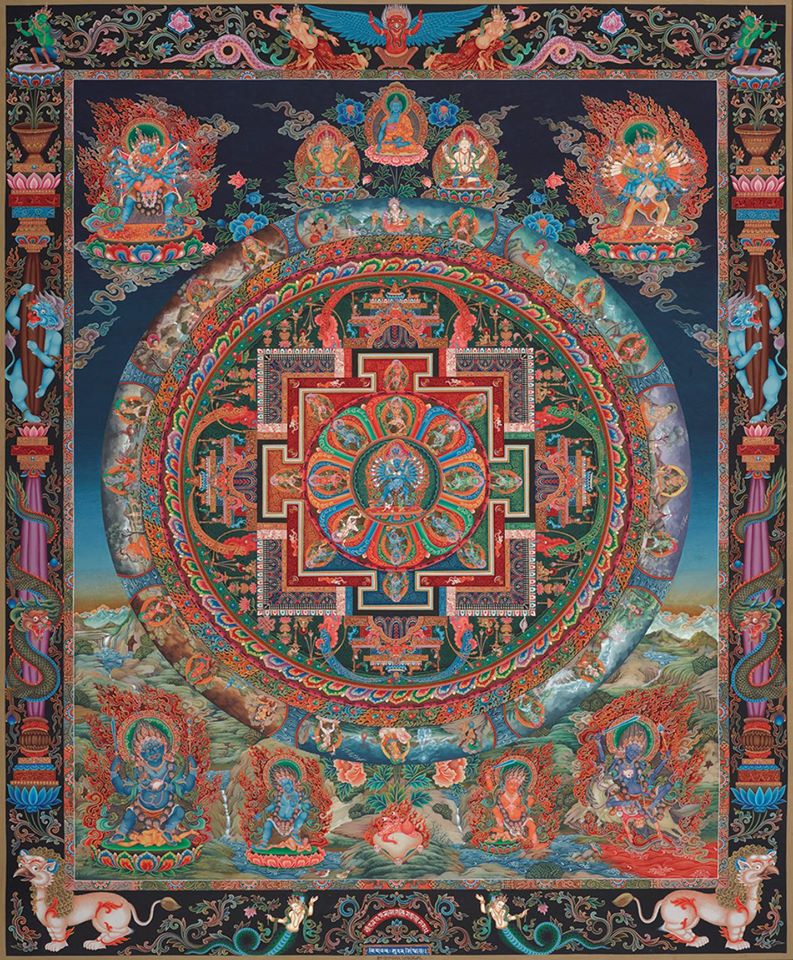 This complex Buddhist mandala was painted by the artist Sundar Sinkhwal and took ten months to complete. It depicts the sixteen-armed ‘Highest Yoga Tantra’ deity, Hevajra and his consort Nairatma on its central dais, with eight yogini goddesses surrounding them in a lotus circle, and another eight goddesses occupying the four gateways and corners of the mandala palace. Encircling this elaborate square palace are three wheels of lotuses, vajras and flames to protect against floods, earthquakes and fire, and outside this is the symbolic circle of the ‘eight great charnel grounds.’

The trinity of deities in the sky above the mandala represent the “Three Jewels’ of the Buddha,” the Buddha, his dharma teachings, and his sangha or spiritual community. The outer frame or ‘torana’ of this painting depicts an assembly of mythical creatures and auspicious symbols, which traditionally appear in the Newar art and architecture of the Kathmandu Valley 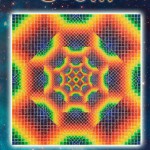