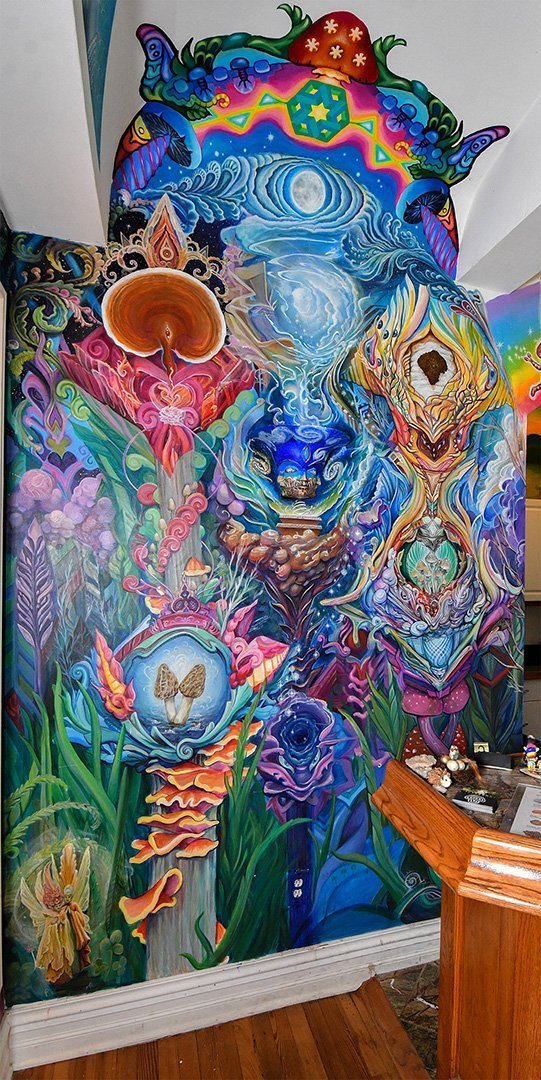 Painting is my life. Murals are my favorite way to paint. It was the ultimate experience to be invited by Alex & Allyson to start the Mushroom Cafe mural project during my month-long artist retreat at CoSM in July, 2012.

The Grey’s generously encouraged me to paint whatever mushroom-themed image I desired, and as much of one wall as I could cover during my stay and shared an abundant collection of mushroom books to inspire me.

As I painted, I realized the name of my mural: “The Royal Court of the Mushroom Kingdom.” I chose exemplary fungi specimens with importance to humans in the categories of gourmet, medicinal, and psychoactive.

The bottom of the left corner showcases the delicious Chicken of the Woods and Morel mushrooms. The right side displays the magical, mysterious Amanita Muscaria & Golden Teachers. The top of the tree-columns are crowned by Reishi & Chaga, which are considered by the master herbalists of the ages to be the King and Queen of the Mushroom Kingdom.

My retreat came to an end before I could get the mural to completion. Luckily, art heroes swooped in to sparkle it up until my return. Amanda Sage, Randal Roberts, Martin Bridge, Michael Divine, Alex Grey and Allyson Grey all added their masterful touches to that first wall. Who knew the Cafe would become the largest-running Visionary Art collaboration in the world?

It was a very special month of my life, one that inspired me to attend to affairs at home in Arizona, find an apartment in Brooklyn and a job in Manhattan and begin volunteering at CoSM when I could. I lived and worked as a CoSM staff member for four years and have continued to refine the mural, adding faeries and atmosphere for a richly activated, organic appearance. 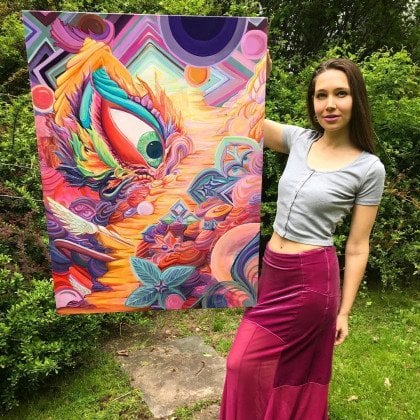 In life, I’m most fascinated by the way everything arises seemingly out of nothing, only to disappear again a relatively short time later! The contrast between this ephemeral, ever-changing aspect of life, and the eternal realm of archetypes is the primary inspiration for my work. My secondary inspiration is the music I listen to while I paint. Sounds I take in while creating directly inform the colors and patterns that emerge on the canvas. To symbolize the otherwise invisible creative force of reality, I developed a pattern language of chevrons, circles, and ornamental forms that are present in the majority of my paintings. I like to paint both abstract and figuratively to express things that I can’t quite explain with words alone; as a way to visually bridge otherwise unseen things such as subtle energy, moods, the sounds within music, and the immediate impression of direct experience. Through my practice, I discovered art to be a magical key that unlocks the door to the transcendent levels of reality. I’ve seen this to be true for both the viewer and especially, the practitioner. As an artist, I encourage others to boldly follow their creative inspirations as deeply as they dare and to witness for themselves the miracles along the path where art leads. Joness Jones is a visual artist who explores the relationship between the world of form and the imaginal realms of dreams and visions. In a flowing pattern language of shapes and geometry, Joness infuses her art with icons of shape and a unique vision of the invisible, mysterious natural forces of creation and destruction. Joness taught herself to paint on the walls of her home by creating full-scale murals. This led to further mural opportunities. Joness was the first muralist to initiate a wall of the Mushroom Cafe at CoSM, 2012. Joness loves painting in her studio in Woodstock, New York.