Mycelium, the neurological network of nature, infuses habitats with interlacing mosaics of information-sharing membranes, aware and reacting to change, with a collective intent for the long-term health of the host environment. In constant molecular communication with its surroundings, fungus in nature devises diverse enzymatic and chemical responses to complex challenges.

During renovation of the 1862 Visionary Victorian at CoSM, now called Grey House, The Mushroom Cafe became a feature of the transformed floor plan, proposed by CoSM Head Builder, Brian James. Eliminate one of the two foyer bathrooms and combine it with a utility room to create a unique, mushroom-shaped cafe. CoSM NYC, open in Manhattan from 2004-2009, had no cafe. The Grey’s seized this opportunity to create The Mushroom Cafe. Lenny Hart and Joey Styles beautifully built and tiled the Cafe Bar. 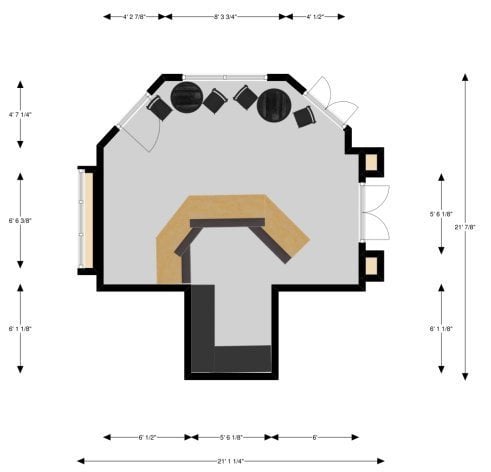 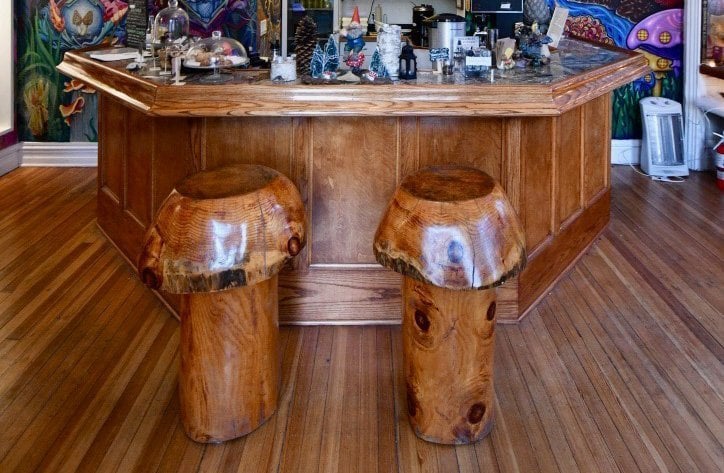 Until 2012, the walls of the Cafe remained white, highlighting the special architecture and refinished the Victorian moulding.  The first Cafe artist, Joness Jones, came to CoSM from Arizona for a month-long artist retreat to study with Alex Grey & Allyson Grey. At their first meeting, Joness showed her portfolio of interior wall murals she had painted throughout her home. Recognizing Joness’ passion for muraling, Alex & Allyson offered her a large wall to develop throughout her retreat. Over the time of her stay, The Grey's visited and chatted with Joness about her paintings and her life as an artist. Following the 30-day retreat, Joness returned to Arizona, tied up affairs, and moved to Brooklyn, New York. She volunteered at CoSM whenever she could and soon became a valued CoSM staff member for four years.

Jon Ohia, former Program Coordinator at CoSM, assisted the Grey’s in launching CoSM’s artist in residence program for The Mushroom Cafe ongoing mural project. Jon & Joness found each other at CoSM and currently live together in Woodstock, New York. 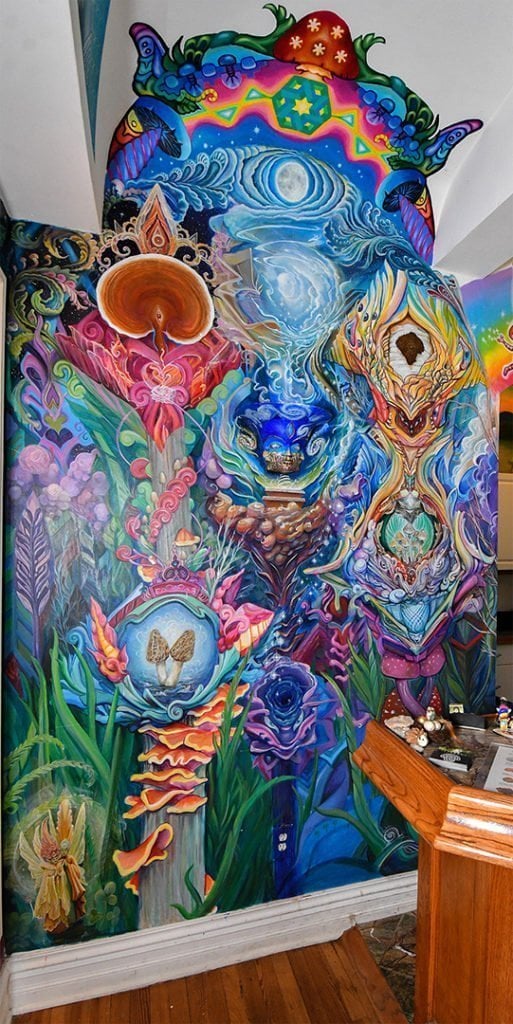 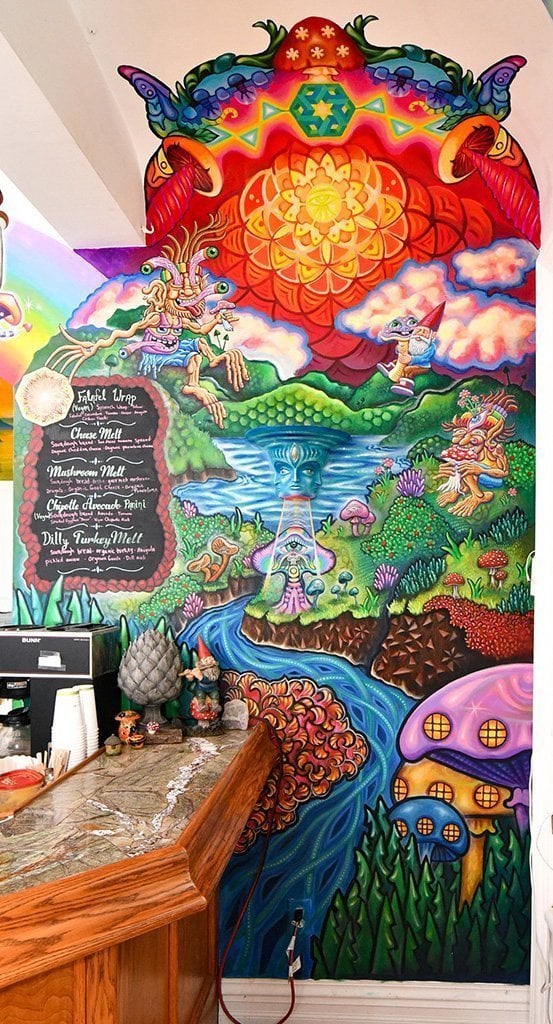 Burgandy Viscosi, exquisite painter of Seattle, became the second muralist in the cafe. Burgundy balanced Joness’ wall by laying excellent ground work, too large to complete in one visit. Collaboration commenced with a visit by Adam Scott Miller (Australia), Chris Dyer (Montreal) and subsequent revisits by Burgandy herself. 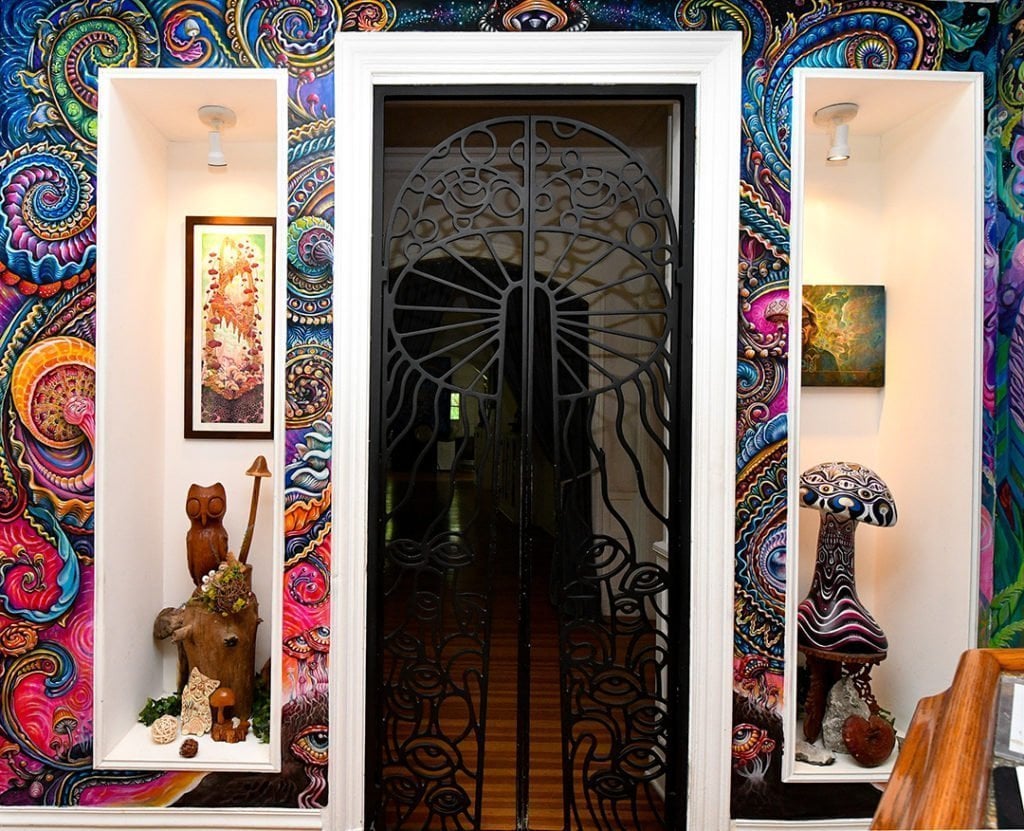 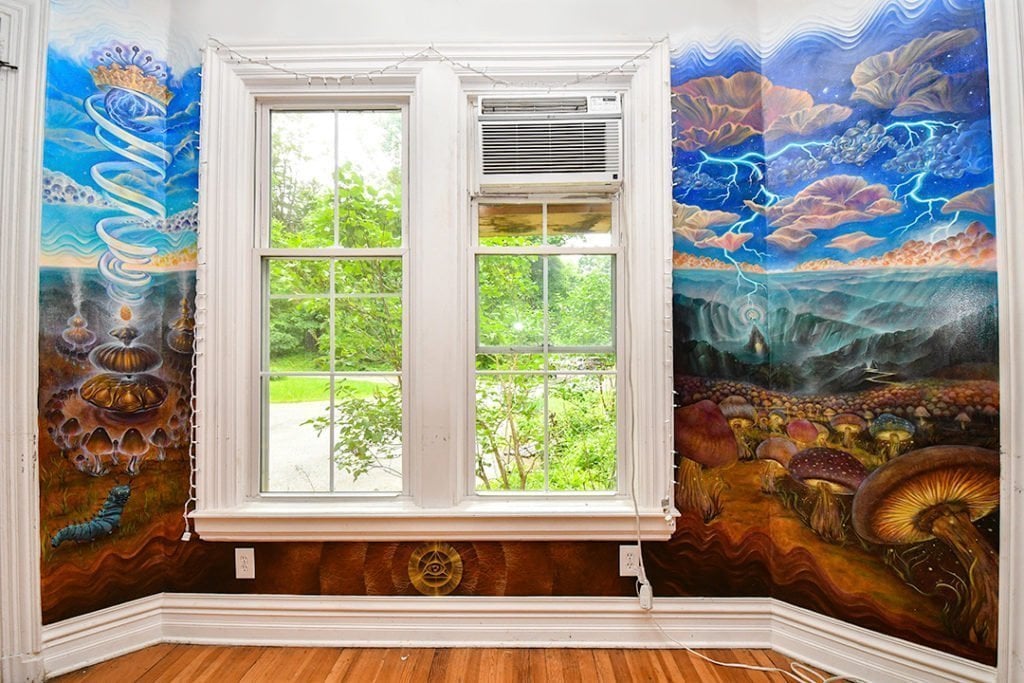 Artists invited to create an original work in the Mushroom Cafe were selected in light of their demonstrated accomplishment as artists, their ability to find their way to CoSM, their willingness to contribute their mural, their richness of imagination, their demonstrated technical proficiency and reliability.

"Like mycelial networks of the Mushroom Kingdom interconnected throughout Planet Earth, so are the painters of this Visionary Artist Family. Each artist contributed a unique style and expression to honor the ancient intelligence of our Fungi Friends."

"The Mushroom Café is a one-of-a-kind mycelial experience honoring our fungal ancestors with a menu that highlights tasty, health-bringing mushrooms." 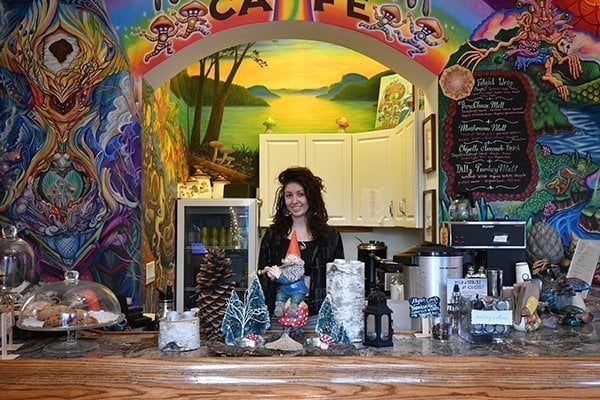 Nature herself is the greatest artist, visionary, and entheogen all rolled into one. All art originating in an artist’s mind is Visionary. The term “visionary” is used to identify art of an imaginative and often spiritual nature. The Mushroom Cafe is a tiny grotto filled with fleeting visions from warped and twisted minds.